As soon as you enter the western gates of the Assumption Cathedral you draw attention to the huge iconostasis, separating the chancel, where the sacred rite is performed, from the nave.

The first iconostasis was made by Dionysius and his circle in 1481, and it was 9.5 meters high. The new iconostasis in a silver framework was made for the cathedral in 1653 at the order of Patriarch Nikon. Created in 10 months, it was more than 16 meters high. Many icon painters from different Russian cities were invited to paint the icons, i.e. Vasily Iljin from Kostroma (apparently the leading painter), Sevastian Dmitriev and Iosif Vladimirov from Yaroslavl’. Later Iosif Vladimirov became one of the renowned icon painters of the Armoury Chamber.

The iconostasis consisted of 69 icons arranged in for tiers: forefathers, prophets, festive, deisis. The upper tier – Forefathers – shows the period of the Old Testament. The next tier depicts images of prophets facing Our Lady of Holy Sign and holding scrolls with prophecies about Christ. The icons of the Festive tier are dedicated to the main events of Christ’s Life. In the centre of the Deisis is a large icon of the Pantocrator, then Our Lady, John the Precursor, and according to the Greek tradition, twelve Apostles which symbolizes the Second Coming. The fifth tier – Veneration - was edited several years later; the venerated icons were arranged according to the Greek standard. The innovations introduced by Nikon were wildly used in creating iconostasis in different cities and monasteries.

The silver-gilt framework was stolen by the Napoleonic army in 1812 as well as the covers of other icons. It was reconstructed according to the remaining fragments during the restoration in 1813 and 1882. The icons were washed, overpainted and coated with drying oil by N.I. Podklyuchnikov, the Academician of Painting, in 1852. 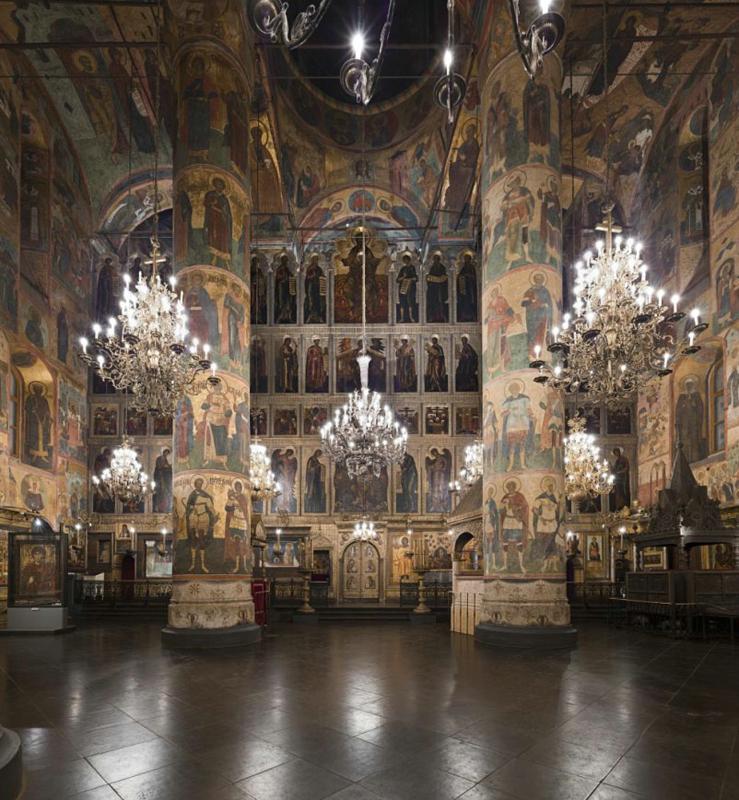