In 1481, two years after the construction of the Cathedral the far-famed icon painter Dionysius, the priest Timofei, Yarets and Konya were charged with the delicate task of decorating the church and its three-tier iconostasis. Presumably, Dionysius and his assistants painted the chancel screen and the walls in the chancel in a mural painting technique at the end of 15th – the early 16th century. A small part of these very ancient frescoes can be seen today.

In 1513-1515 by decree of the Grand Prince of Muscovite Vasily III, the Cathedral was entirely painted. Due to the fire in 1626, the frescoes were severely damaged. The walls were repainted in 1642-1643 in the time of Tsar Mikhail Feodorovich. The work was performed by some 150 skilled painters from Moscow and other Russian cities led by the court icon painters Ivan and Boris Paisein, Sidor Pospeev, Bazhen Savin, Mark Matveev and Stepan Efimiev. 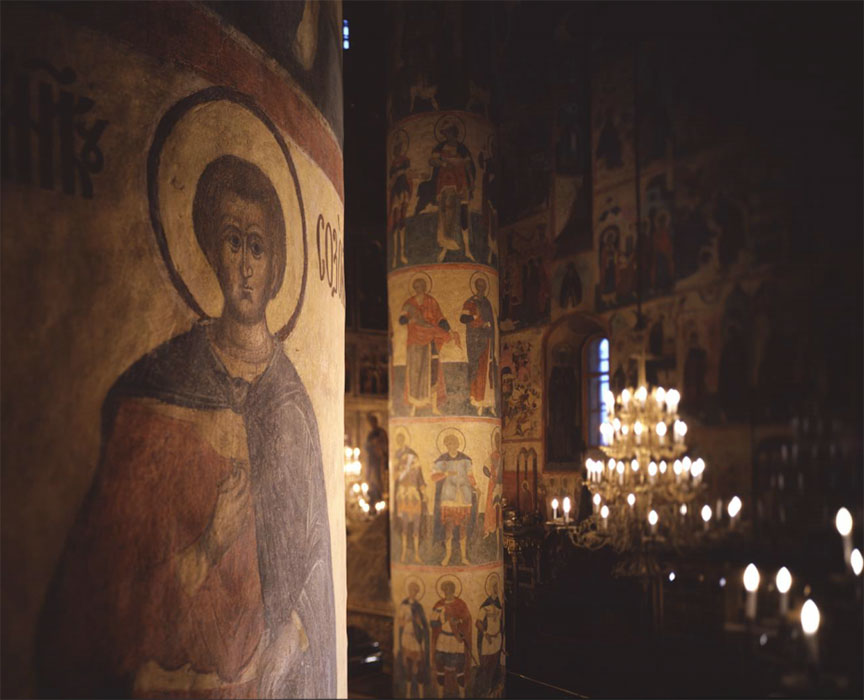 The painters spent the first year on an extensive preparatory work. The 16th-century themes and the arrangements of paintings were to be repeated in the course of the renovation. Therefore Ivan Paisein and his assistants draw patterns with papers against the walls and only after that they broke the old plaster off and applied a new chalk ground. In the summer of 1643, the work was mainly done. The magnificent ensemble of the murals in the Assumption Cathedral pieces together 249 thematic compositions and 2,066 individual characters. 1,721 gold coins were spent on gilding the background.

The painters used both techniques of mural painting and tempera painting on dried plaster, thoroughly drawing representations of faces, folds of robes, again and again, assimilating wall-painting to icon-painting.

The mural of the Cathedral is well-thought-out and clearly arranged. There are various representations of God in the cupolas and the upper section of the Cathedral’s walls is illustrated with the Scenes from Gospel. They are arranged according to the succession of divine services during a year. The wall-paintings of the next two tires tell the life story of Our Lady and illustrate “The Acathistos", a hymn of worship of the Mother of God. Seven Ecumenical Councils are depicted in the lower tier. The Cathedral’s western wall accommodates an immense composition The Judgment Day. The pillars that support the vaults bear the images of numerous martyrs.