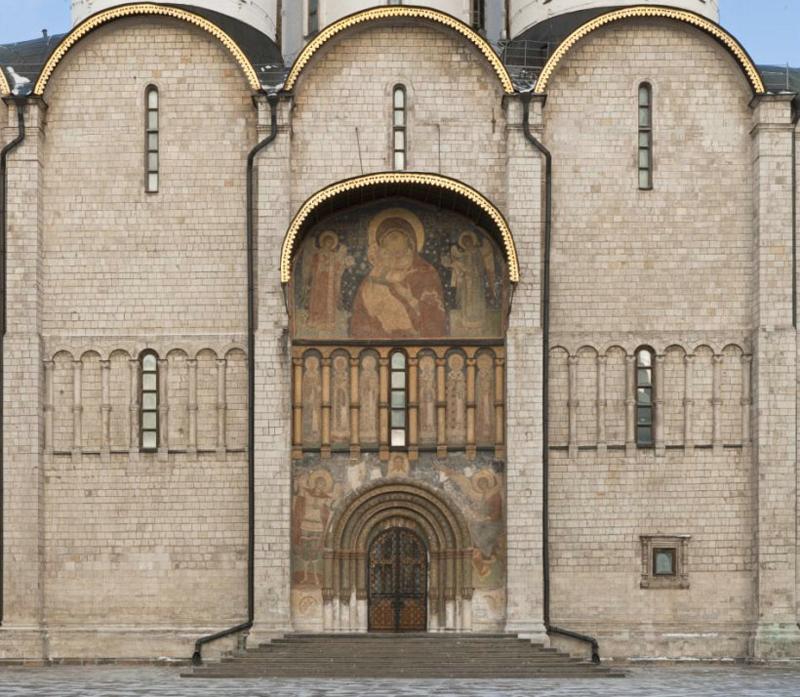 The outer murals of the Assumption cathedral were repeatedly repainted and renovated during the 17th – 18th centuries. However the design of the paintings as well as the initial execution, probably date back to the time of the cathedral construction. The upper central wall part of the main southern facade, facing the Cathedral square, is crowned by the monumental, seen from the long distance, the image of the Virgin of Vladimir with archangels Michael and Gabriel. The image is an enlarged reproduction of the miracle-working icon, which had been kept in the Assumption Cathedral and worshipped as the principal sacred object and the Palladium of the Russian state.

Six images of saints are painted under the image of the Virgin, representing the Moscow Metropolitans Peter, Alexius, Jonah and Philip, as well as the saints of Novgorod – Bishop Nicetas and Archbishop Ioann. Placing images of the Moscow Metropolitans on the facade of the cathedral temple next to the image of the Virgin is very appropriate as the Assumption Cathedral has been named “the house of the Holy Virgin and the Glorious Miracle-workers Peter, Alexius and Jonah”. Images of the saints of Novgorod are likely to be associated with one of the important events in the Moscow history - the conquest of Novgorod, the former independent boyar republic, by Ivan III in 1478. 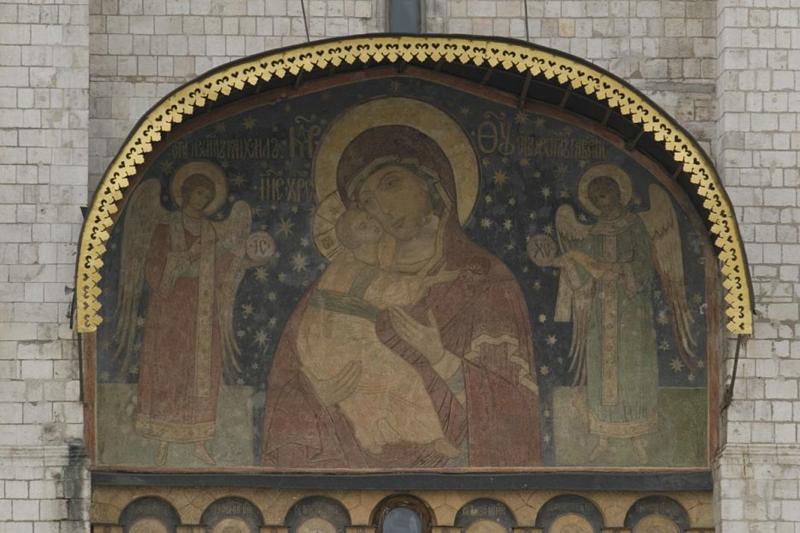 The lower tier of murals, framing the expanded portal, is connected to the subject of the entrance to the temple. Archangels putting names of people, who enter the temple in the fear of God, into the scrolls, are depicted to the right and left of it. The Deesis is painted on three round medallions located right above the entrance, with the images of Christ, the Virgin and John the Baptist praying.

The Mandylion is placed above the outer arch of the expanded portal. This image has often been put above the town and temple gates as well as on the banners and gonfalons, as a symbol of the God’s protection and patronage.