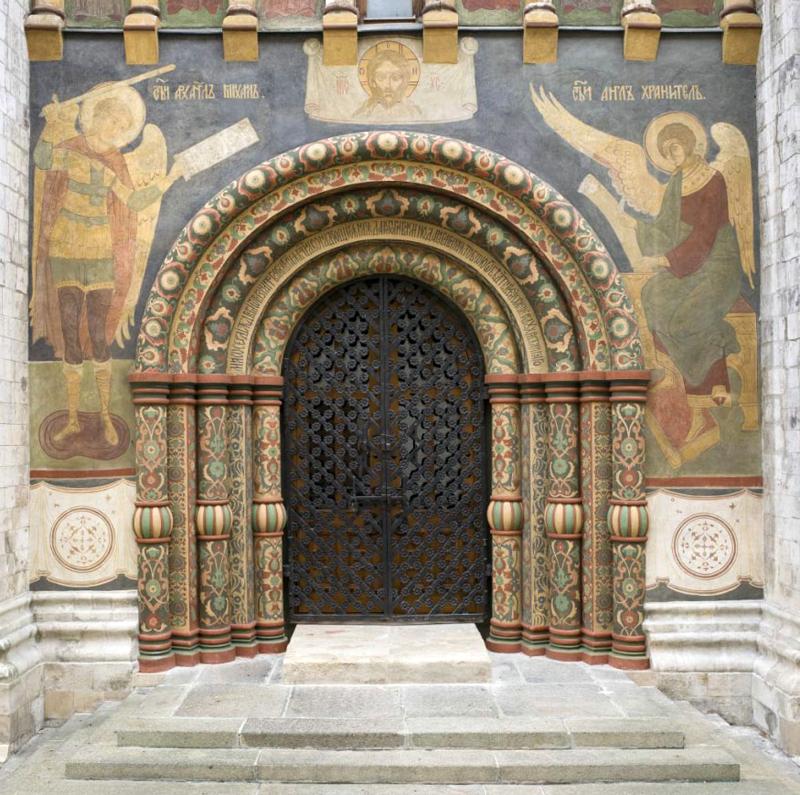 The northern façade, facing the Patriarch’s Palace is adorned with the blind arcade frieze with images of the six most venerated Russian saints and founders of the major monasteries – Paphnutius of Borovsk, Isaiah, Ignatius and Leontius of Rostov, Dmitry Prilutsky and Sergius of Radonezh. Using images of these saints is more traditional for the monuments of the 15th – 16th centuries’ art in comparison to the selection of saints depicted on the murals on the southern temple wall.

The fact that the three saints of Rostov are included in this cycle can be probably explained by the participation of the Rostov Archbishop Vassian in ordering the murals as well as the iconostasis of the new Assumption Cathedral. The spiritual counsellor of Great Prince Ivan III, Vassian was one of the major ideologists of that time.

The upper part of the northern wall above the columned frieze with figures of saints is decorated with the vast composition “The Apostles’ Gathering”. It presents shoulder-length figures of Christ, the Virgin, John the Baptist and the Twelve Apostles, surrounded by the climbing vine. The Angels holding scrolls are located on both sides of the portal the same way as on the southern facade. This entrance was meant for Metropolitans and Patriarchs, as it was facing the Patriarch’s Palace.

The memorial stone cross is placed at the north-western corner of the cathedral, under the canopy. The cross is dedicated to the Metropolitan Jonah buried in this corner inside the cathedral.