ARCHITECTURAL DESIGN OF THE INTERIOR SPACE 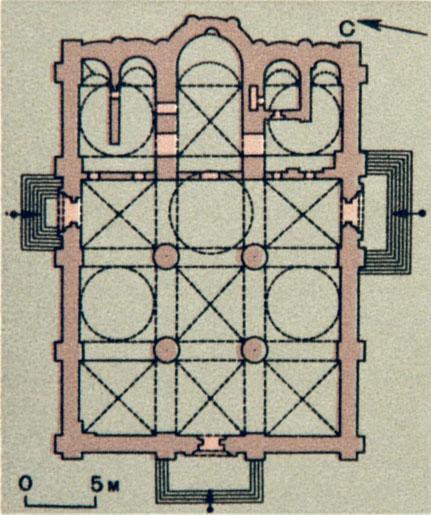 The plan of the Assumption cathedral shows it has an elongated form, slightly oblong to the west, and is divided into equally-sized squares with cross vaults. They are based on six high, widely spaced pillars. Two of them, hidden behind the iconostases, have the traditional cross shape. The other four pillars, determining the appearance of the central part of the temple, are round, creating a sense of integrity and readily visible space of the temple.

The halls plan of the cathedral doesn’t provide for the separation of the central under-dome cross. Fioravanti built the walls of the middle tholobate a bit away from the inner diameter of the under dome square in order to keep the traditional dominant of the central cupola. The resulting annular chamber at the cupola basis was intended to be used as a treasury cache. Thus, the emphasis is shifted from the under-dome space to the central part of the cathedral bounded by the four round pillars. Unlike his predecessors, Fioravanti has refused to build the choir balcony in the western part of the temple has and separated the eastern area by the low altar partition. Thus, the Italian architect has created the integral, logically and geometrically harmonious space, filled with light, pouring from the wide windows and cupola drums. 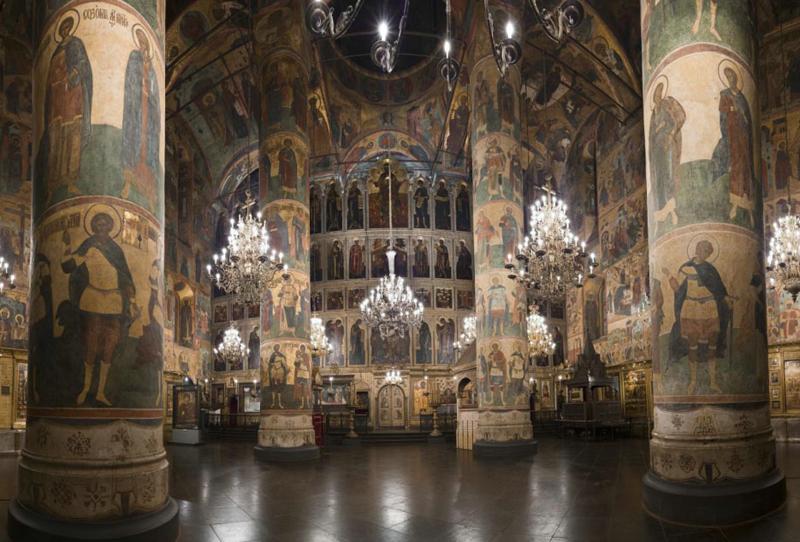 Despite his strive for clarity and logic of space, Fioravanti organized the altar part of the cathedral in a more complex way. To place the three formerly existing side aisles, included in the architectural composition of the altar premises, he had to divide the side naves in half and complete them with four apses. The prothesis and the Petroverigskiy side aisle are located in the northern part of the altar. The southern part houses the diaconicon also serving as the Eulogy of the Virgin side aisle, as well as the Demetrius side aisle. They are separated by the rather low walls, about four meters high, and are illuminated through the windows of the eastern cupolas and side apses.