THE ARCHITECTURAL IMAGE OF THE CATHEDRAL 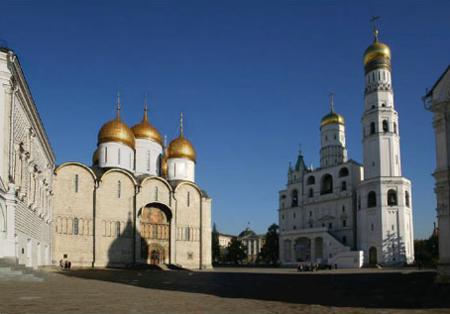 The architectural image of the Assumption Cathedral has always amazed the contemporaries of Aristotele Fioravanti and is still striking us by the mixture of tradition and originality, embodied in it. The resemblance between the Moscow cathedral and its model of Vladimir is obvious at first sight. Both of the sublime five-domed cathedrals have white-stone walls, columned friezes and easy semicircles of blind arches. However the Italian master decided not to copy the plan of the cathedral of Vladimir, so he has found a temple unparalleled in Russia, resembling a secular ceremonial hall.

Branches of the central cross formed by the intersection of the middle paces do not stand out either by height or by width, which constitutes the original characteristic feature of the architecture of the Assumption Cathedral. As a result, the layout of the temple is divided into identical squares. The temple does not have a Greek cross plan with a distinct game of volumes of the different-sized parts of the temple, typical for Byzantine and Russian temples. The vertical parts of the façade walls are equal, creating the perception of the solidity of the volume and highlighting the expressiveness of the building’s façades. 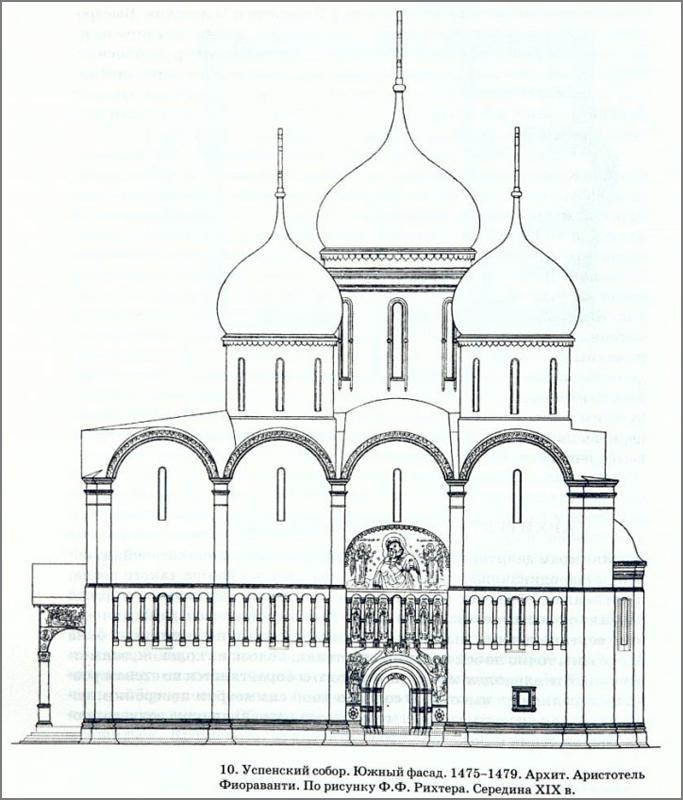 In accordance with the architectural principles of the Renaissance, the Italian architect expected the building to be harmoniously incorporated into the ensemble of the Cathedral square rather than perceived from the volume point of view. Till the 17th century, all the buildings of the Cathedral square had focused on the fundamental architectural forms and concrete decorative elements of the Assumption Cathedral and had sometimes copied them.

The main southern façade of the building is the most spectacular one. It’s divided by the severe pilaster straps into equal parts which end up with the equally high semicircles of blind arches with narrow upper tier windows placed inside them. Walls made of white-stone blocks are placed on the massive profiled socle. Though borrowed from the cathedral of Vladimir, the columned frieze surrounding the façades of the temple is devoid of the plastic expressiveness typical for the Vladimir and Suzdal architecture. It seems to be carved into the mass of the wall without wrecking its plane. The lower tier windows are inscribed into the arches of the frieze right in the centre of each wall part.

Sothern and northern portals serving as ceremonial entries to the temple from the Cathedral Square and the Metropolitan’s Palace are arranged with expanded portals with the severe pattern of semicircular arches and the Moscow decorative “beads”. High stairs with broad landings, intended for the ceremonial departures of Tsars and hierarchs, lead to them. It’s only in the western side, facing the Metropolitan’s palace and the home Church of the Deposition, where Fioravanti built the stone perch with the traditional inverse-pyramid-shaped decorative detail.

The façade of the Assumption Cathedral is characterized by some asymmetry of its construction. The cathedral’s domes are closely grouped around a massive central cupola, and the southern and northern portals are shifted eastwardly. As for the eastern altar apses, they are a bit lower against the blind arches, less voluminous unlike the ones of the cathedral of Vladimir, and are hidden by the pillars from the north and south. This exaggerates the perception of the solidity of the building distinctly felt by the contemporaries, who noted that the temple was built "like a single stone".