CEREMONIES AND RITES AT THE ASSUMPTION CATHEDRAL

Not only was the Assumption Cathedral the All-Russian cathedral church, but also it was an important public place, where grand ceremonies and rites of the national significance were conducted.

The first rite of the inauguration of the grand prince in the Assumption Cathedral was carried out on 4 February 1498. During the ceremony, Ivan III solemnly bestowed ancient regalia—barmy (regalia collar) and the Cap of Monomach—to his grandson Dmitry. There was no such a title in Russia before, as the title of grand prince was only inherited along with the patrimonial estate. And during the Mongol invasion, yarlyk (edict of the Horde Khan) was given to princes in the Horde allowing them to govern a certain territory. 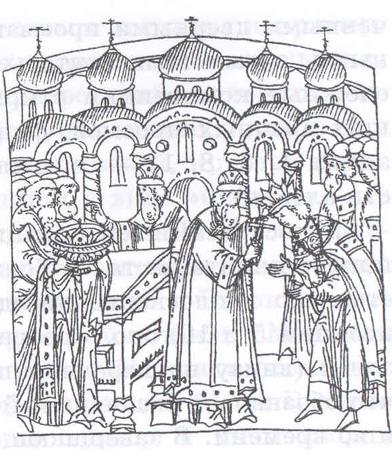 The inauguration of the young Ivan IV, which took place in the Assumption Cathedral on 16 January 1547, was a key event in Russian history. The titles of tsar and sovereign were solemnly and formally adopted at the ceremony. A pectoral cross, indicating of the sanctity of the Royal power, was incorporated as regalia along with sceptre and chain. Later the solemn rite of anointing with holy oil, symbolizing deity of the tsar’s power, was introduced at the inauguration ceremony of Fyodor, the grandson of Ivan IV.  Boris Godunov at his inauguration on 1 September 1598 was given the orb along with the sceptre. It represents an ancient symbol of the power of Byzantine emperors. The last inauguration was a joint enthronement of the young rulers Ivan and Peter, sons of Alexey Mikhailovich, in 1682.

In 1721, Peter I was invested with the title of emperor. He declared Russia an empire and introduced the ceremony of coronation. The rite was carried out for the first time for Catherine I, who was bestowed with the crown by her husband Peter I. The last sovereign to be crowned in the cathedral was Emperor Nicholas II. His coronation took place on 14 May 1896. 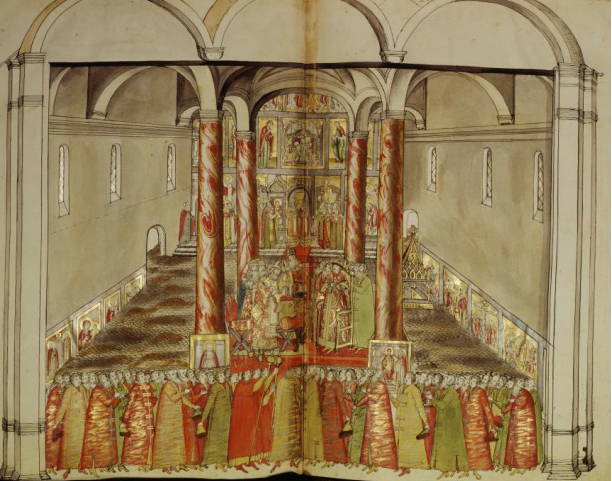 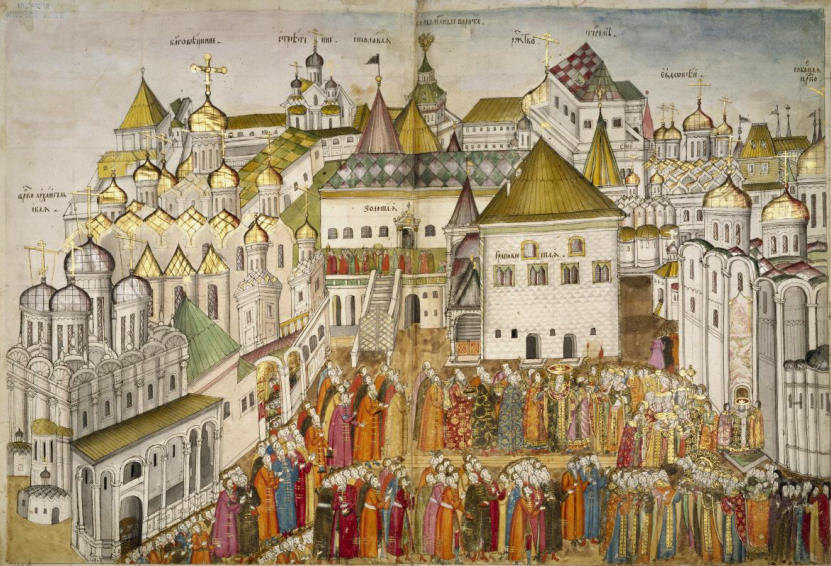 Hierarchs of the Russian Church—metropolitans and patriarchs—were conferred titles at the Assumption Cathedral. Until the mid-15th-century Russian metropolitans had to visit the Patriarch of Constantinople to obtain the title. In 1448, Metropolitan Jonah was elected at the cathedral for the first time by the Council of Russian bishops. This marked the beginning of the independence of the Russian metropolis from Constantinople. Anointing of the first Russian patriarch Job by Jeremias II Tranos, the patriarch of Constantinople, took part at the Assumption Cathedral on 26 January 1589 in the presence of Tsar Feodor Ivanovich.

The Cathedral has become the burial place for the heads of the Russian Orthodox Church in the 14th - 17th centuries. The holy relics of Moscow miracle-workers Peter, Jonah, Philip II and Hermogenes rest here in precious shrines. 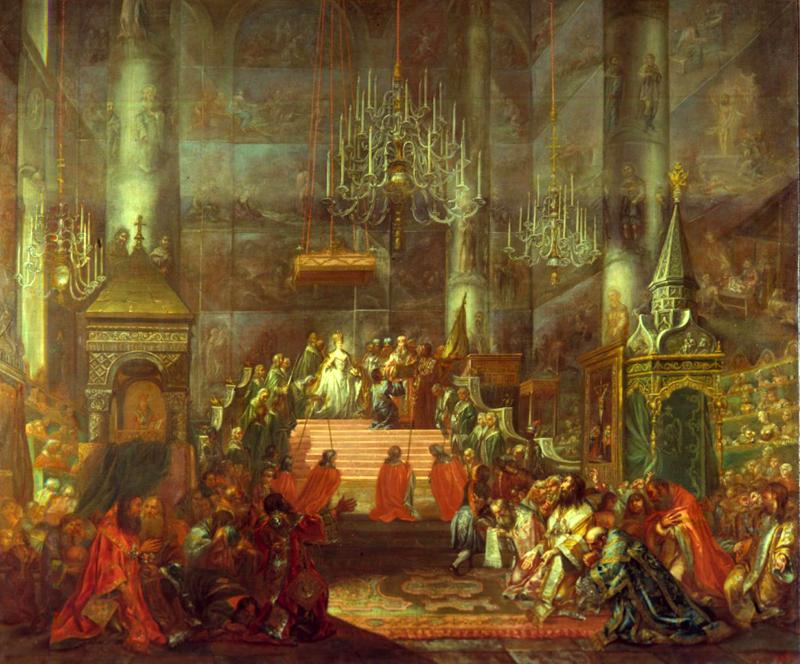 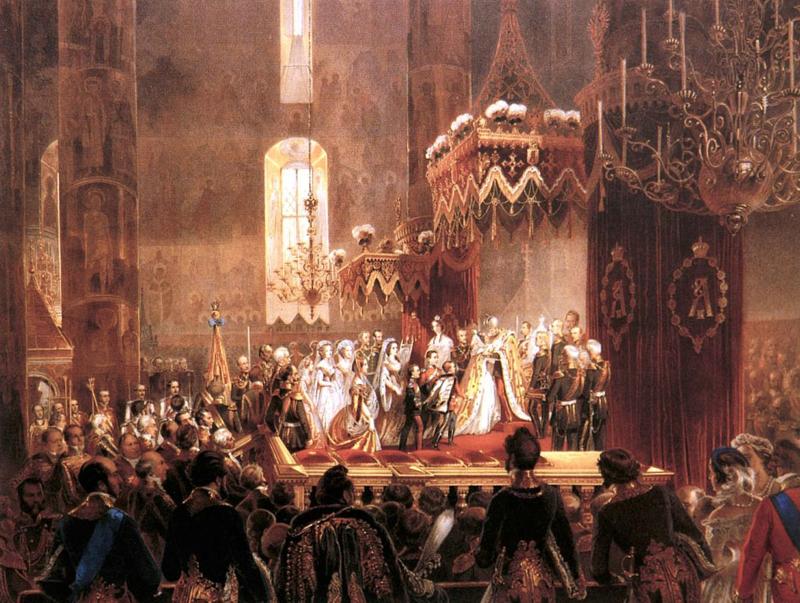 There were other events taking place in the Assumption Cathedral as well. Since olden times appanage princes and other titled persons swore fealty to the great princes of Moscow and later to the tsars near the tomb of Metropolitan and Miracle-worker Peter and the main Russian sacred object—the icon of Our Lady of Vladimir. Besides, voivode and princes were given the blessing here before the important military campaigns and they celebrated their triumphs with solemn church services.

Consecration of anointing oil and chrism was carried out in the Assumption Cathedral. These aromatic oils were used for sacraments such as extreme unction, christening, the ordination of priests, and anointing of a tsar at his coronation.

Various rites were held inside the cathedral’s walls. A dramatized rite commemorating the story of three Babylonian youths having been thrown into a fiery furnace for their desire to keep loyalty to Orthodoxy and not to worship pagan deities, involved a wooden furnace having been installed at the centre of the cathedral, and an angel painted on a parchment descended from above the iconostasis.

Other rites included pronouncing an anathema against apostates, as well as patriarch shedding water from a special basin on the legs of 12 archimandrites—the heads of the monasteries—symbolizing the ablution of the Apostles’ legs by Jesus Christ as a token of humility and brotherly love. The congregation was sprinkled holy water on too.

The weddings were as a rule carried out in the grand princely family church of the Annunciation. However, the weddings of a state significance were held at the Assumption Cathedral. For example, Grand Prince Vasily I Dmitriyevich led to the altar with Lithuanian Princess Sophia, daughter of Vytautas the Great; the marriage ceremony was performed by Metropolitan Cyprian in 1391. The solemn wedding of Ivan III and Sophia Palaiologina also took part there in 1472. Vasily III got married to Solomonia Saburova in 1505 and later to Elena Glinskaya, the mother of Ivan the Terrible, in 1526 at the Assumption Cathedral. The wedding of Pseudo-Dmitry I and Marina Mniszech took place in the cathedral on 8 March 1606, during the Time of Troubles and the Polish–Lithuanian intervention. The wedding of Emperor Peter I and Catherine I, as well as her coronation, was carried out simultaneously there in 1721.